Welcome to Feeble Crew [short for Large Sailing Vessel, Feeble Crew] home of those who believe in:

Or, in other words, "transitioning" should be fun and exciting [ Dr. Death, puhlease ] and sailing around the world is a great way to do it. 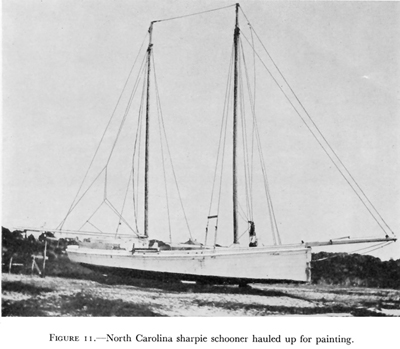 Here is pictured a North Carolina sharpie schooner hauled out for painting. The example pictured is probably under 50 feet, stem to stern, and therefore, depending on crew size, possibly too small for our purposes.

But first, a feeble crew slogan: No passengers, only crew. Everyone on board must be a capable sailor. Landlubbers who wish to embark on a feeble crew expedition will be brought to a reasonably expert level, either before or at the very beginning of the voyage. Any landlubber who made insufficient progress, or anyone else who cannot adapt to life on a sailing sharpie will be promptly put ashore and their money refunded.

All of which brings us to a discussion of the crew size [number of people per expedition]. We are currently planning on crew sizes of between ten and twenty. Each crew will be organized as either a two watch [six hours on, six hours off], or three watch [four hours on, eight hours off] crew, with smaller crews on the six on - six off schedule.

In Figure 9 below we have the plans for a 42.5' cat-ketch sharpie as mentioned above. Notice the two cubbies and the hatch between them. Also notice the honking big centerboard and centerboard case. Even with the fore cuddy extended aft over the area shown as main hatch, accommodations would be spartan for a crew of even five. For one thing, the centerboard case would bisect the additional cuddy area in two.

So we will need a larger boat than the one pictured above. Somewhere between fifty and sixty feet might do it for a crew size around ten. Certainly 75' should be adequte for a crew sizes between ten and twenty.

We are in the process of comissioning cartoons [preliminary designs] from the two leading sailing sharpie designers: Phil Bolger and Reuel Parker. As soon as they become available we will post them here.

Why no paid crew you ask. The brief answer is that it would be both unethical and counter productive. Although every crew and every crewmember needs to be not-yet-feeble when starting out;